Beat the January Blues at The Anchor

Stuck for something to do tomorrow night?

The Anchor presents an evening of great stand up comedy, with 11 acts (at the last count!) starting at 8pm this Friday.

Tickets are only £3, so grab yourself a pint of the finest real ale, pull up a pew, and get ready to be entertained! The night usually goes on until around 22:30, and it’s a good idea to arrive early as all previous shows have sold out quickly.

The Misfits Comedy group was formed in the summer of 2013, comprised of comedians trained by Birmingham’s very own Barbara Nice, who continue to perform at various comedy nights in Birmingham, the Midlands and further afield.

Keep an eye out on the website as The Misfits hope to organise some free open mic shows at The Anchor to try out new material along with their well-honed jokes and anecdotes. 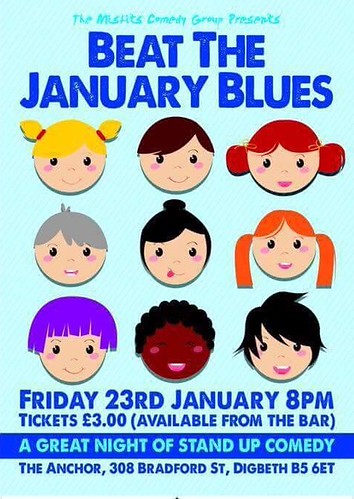