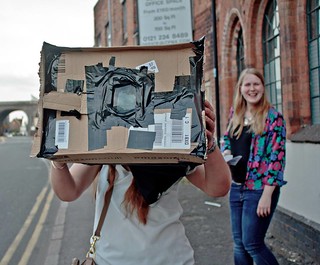 Those of you who were out and about in Digbeth over the summer may have seen a couple of crazy kids wheeling about a box and inviting people to look inside it. I myself had a go on Heath Mill Lane – see the pictures for proof!

Well, those crazy kids are Jenny Duffin and Pete Ashton, and the rickety box was the first step in their ambitious plan to build a permanent and public Camera Obscura in Birmingham. Both Jenny and Pete are passionate about photography and have experience in running events and workshops, so we think they’re worth a punt.

But what is a Camera Obscura?

The term Camera Obscura literally means ‘Darkened Room’ and would have traditionally been a chamber with a small hole or lens on one wall and a projection screen on the other. You can make your own Camera Obscura by covering all the windows in a room and making a small hole; an image of the view from the window should appear on the opposite wall, upside-down and back-to-front.

Jenny and Pete have recently started a Kickstarter campaign for their project, and smashed the initial target of £1,000 in a matter of hours. However, the more they raise, the better the finished article will be. Bristol, Edinburgh, Aberystwyth and London all have a Camera Obscura, so it’s about time Birmingham had one too!

We think the project is worthy of your support; to learn more and to donate, click here to visit the Kickstarter website. 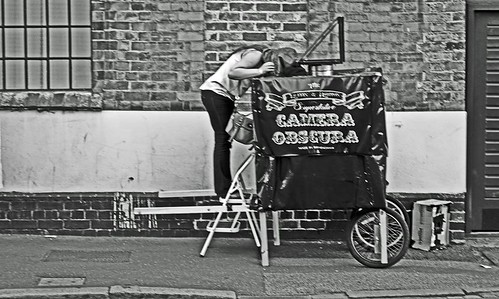