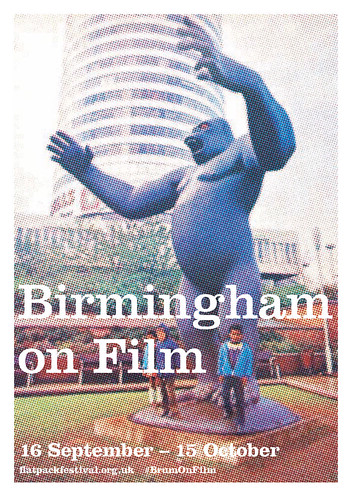 When: Friday 16 September – Saturday 15 October
Where: various locations around Digbeth and Birmingham

You may not think of Birmingham as a natural place to make movies (like London or San Francisco perhaps), but it’s actually a fantastic and versatile place to make a film.

To prove it, Flatpack are holding Birmingham on Film, a season exploring movies filmed in Birmingham, from 1900s street scenes to 21st century zombie thrillers

Highlights of the Birmingham on Film season include:

Birmingham’s Film Knight
Monday 12th September until Friday 21st October
BCU Parkside, Digbeth, B4 7BD
Sir Michael Balcon was the most prominent and influential British filmmaker of the 20th century. He was also a born and bred Brummie. This exhibition explores his life and his work.

Take Me High
Thursday 6th October, 19:00-22:30
Rum Runner Yard, Birmingham, B1 2DY
A canalside screening of offbeat Brit musical Take Me High. The film features Gas Street Basin and stars Cliff Richard as a merchant banker who invents a ‘Brumburger’, which will be recreated on the night by Digbeth’s Original Patty Men.

Limelight #5
Saturday 8th October, 19:00-23:00
The GAP Arts Project, Unit 316 The Jubilee Centre, B5 6ND
An evening of film, art, food, and music all inspired by Birmingham. Flatpack be screening a selection of short films all made by young people under 25 from Brum.

City of a Thousand Locations
Monday 10th October, 17:30-19:30
The Mockingbird, Digbeth, B9 4AA
A peek behind the scenes of some of Birmingham’s recent productions from the zombie dystopia of The Girl With All the Gifts to spy thriller The Game.