On Saturday 8th October, three 20th anniversaries will be celebrated at The Spotted Dog in Digbeth. Back in 1996, three organisations – BRAINSTORM Open Mic Variety Night, Musical Connections and Mavericks Angels Creative Sparkle Awards – were born, and this year they’re all joining forces!

Expect lots of live music and talent, food and feasting, workshops, and laughter at this event, which will raise funds for The Choir With No Name and Acorns Children’s Hospice.

BRAINSTORM was a radical innovation in the early days, bringing together people who worked in mental health services and those they cared for as fellow creative, artistic human beings. The event has always been a Digbeth baby, starting life in 1996 at the Wagon and Horses before temporarily residing as RiffRaff at Moseley Arms before coming home to The Old Crown for about fifteen years. After a two-year hiatus, it was brought back to life at The Spotted Dog in 2008, and continues to run there on the third Wednesday of every month.

BRAINSTORM is an open mic where anything goes: there are no headliners, and everyone gets ten minutes to perform. However, this edition is slightly special, and will see singer-songwriter Andy Wickett (founder member of TV Eye, The Xperts, and Duran Duran) out in force with his band World Service. To learn more about BRAINSTORM, visit the Facebook page here.

Peter Churchill is director of Musical Connections, which is a network for vulnerable and isolated adults including those with specific needs, physical disabilities and/or mental health service users. Musical Connections works with these individuals to bring out their latent musicianship and connect them to each other through the use of music. Peter is also Musical Director of The Choir With No Name, who perform regularly in Moseley. Funding for the choir has recently been cut, which is why this event will also be raising funds to allow the group to continue.

Has someone lit a creative sparkle in your life? Has anyone lifted your spirits? Nominate them for a Sparkle Award, with a short reason as to why they are being appreciated, and a Roving Angel will see to it that they receive their award (anonymously if you would prefer). Email your nominations to burjan@blueyonder.co.uk, or contact the BRAINSTORM Facebook page.

For more information about the event, please visit the Facebook event page. 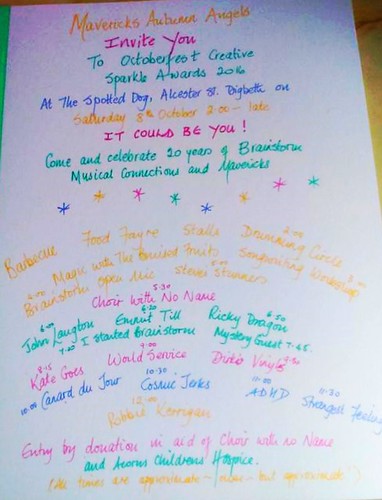