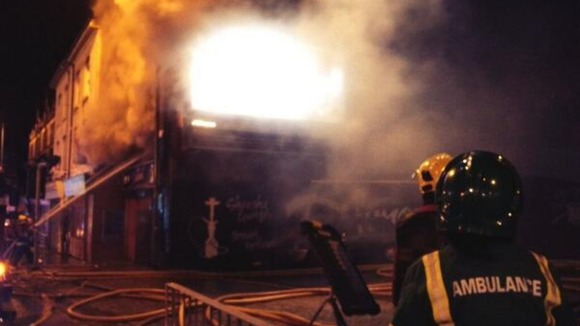 It was an eventful start to Christmas Day in Digbeth yesterday, as firefighters were called to a blaze on High Street Deritend at 03:14.

Luckily, all 14 people living above the fire escaped, including two who jumped from the first floor, suffering only minor bone injuries and smoke insulation.

The High Street between Heath Mill Lane and Adderley Street was closed for several hours while the fire was dealt with, and electricity supply to the buildings was isolated as a safety measure. At the fire’s peak, a total of 40 firefighters and ten fire engines were at the scene, and a police helicopter was dispatched to relay information.

The fire was extinguished and most crews left the scene by 15:30, but firefighters continued to check the site periodically throughout the day.

It is not yet clear how the fire, which is subject to investigation, started. However, it is believed to have affected the Diamond Sheesha lounge, which has prompted calls from the public for more to be done to prevent the spread of shisha lounges:

@ijangus Another shisha bar up in flames in b’ham, digbeth. Fire still burning. Someone is going to get killed pic.twitter.com/rC7MwhyIW6

Another shisha bar in Digbeth has gone up in flames. They’re a serious menace and @BhamCityCouncil have to act. pic.twitter.com/oyvpvOwo4a