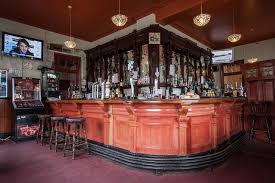 CAMRA (the Campaign for Real Ale) have recently published their National Inventory of Historic Pub Interiors. Only pubs with interiors not significantly altered since the Second World War were considered for inclusion.

Birmingham features quite heavily in the book with eight pubs, but more importantly for our little part of the city, two of Digbeth’s pubs have been listed as of national historic importance; The Anchor and White Swan.

The Anchor, dating from 1902, still has its original counter and bar-back, with heating pipes running along the foot of the counter. Over at the White Swan, the original floor plan and extensive tile decoration have also been retained for almost 100 years.

The tiled corridor at the White Swan in Digbeth. Image: Birmingham Mail

Among the pubs designed by architects James & Lister Lea is another of Digbeth’s establishments, The Woodman, which will hopefully be reopened later this summer. (More information here.) And the Digbeth/CAMRA link doesn’t end there: the Birmingham Beer and Cider Festival will return to the Second City Suite in Digbeth again in October 2013. Click here for more preliminary details about the event and information for volunteers.

Author of Britain’s Best Real Heritage Pubs, Geoff Brandwood, said: “You can’t value heritage until you’ve lost a good proportion of it. We’ve lost some wonderful pubs in Birmingham and you have to wonder: ‘What are we doing to ourselves?’ Pubs won’t be built like these ever again so [we] should celebrate and make the most of it.”