Never shying away from unusual performances, Birmingham Opera Company has announced it will be performing Mittwoch aus Licht (Wednesday from Light) in Digbeth in August. This will be the first time that all six parts of the opera have ever been staged together, forming a five-hour-long epic.

The show will be performed four times between 22nd and 25th August, starting at 4pm each day at the Argyle Works on Great Barr Street. The Birmingham Opera Company (BOC) needs all that space for the show, which features two choirs, numerous musicians, and two separate performance halls.

BOC’s vision is “that opera must go beyond the opera house and beyond the enclosed existing opera audience”. This is certainly true of other performances held in Digbeth: the BOC used the Argyle Works for their specially-commissioned Life is a Dream during March. Using a disused warehouse with no stage or seating means that the show and its actors become part of the audience. 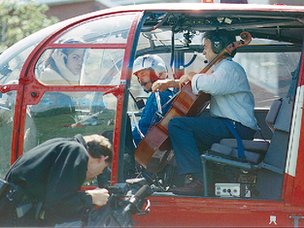 You might think that a five-hour operatic performance using BOC’s trademark audience participation is ground-breaking enough to be part of the 2012 Cultural Olympiad. Think again. The finale of Wednesday from Light features a string quartet performing from four separate helicopters, with Radio 1’s DJ Nihal commentating!

The helicopter segment will be available for all to see online, although those of us living in Digbeth may find it easier to just look out the window! For more information, visit the Birmingham Opera Company website.