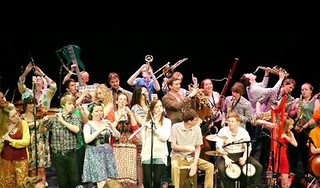 In an event unlike any other, Joe Broughton’s 46-piece Folk Ensemble return to The Spotted Dog for an unmissable gig.

The folk ensemble is something of a legend now, and with Joe at the helm since 1998, has seen the numbers in the band grow to 100! It is certainly no easy task to accommodate the group on a stage, which is why we put them in Birmingham’s premier pub garden instead 🙂

Joe Broughton’s Folk Ensemble tour the UK every year, and the Spotted Dog party (trust us – it’s mental!) has become an annual event announcing the start of the folk festival season.

All proceeds from the gig will fund the Ensemble’s tour, but as space is limited space make sure to arrive early! See a video from last year’s gig below, and visit The Spotted Dog website for more information.