Lloyds of Birmingham – and Digbeth 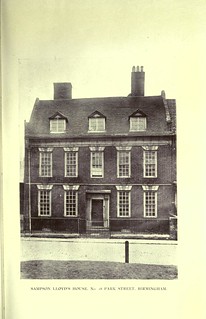 The lovely Kate Gordon sent me a link to a somewhat interesting book some time ago, entitled: The Lloyds of Birmingham, with some account of the founding of Lloyds bank (1907).

The title is a bit of a giveaway, in that the book charts the history of the Lloyd family’s move to Birmingham, their development, and their subsequent establishment of the now national bank for the ‘City of a Thousand Trades’.

Since the family were tradespeople before bankers, it’s only natural to assume that the book would reference Digbeth as the birthplace of industry in Birmingham. For example, page 48 recounts the building of the Proof House which remains in Digbeth to this day.

However, it turns out that there are more than just fleeting references to our area, as the family had a much stronger connection to Digbeth than you might think. Sampson Lloyd lived in Digbeth, in Park House at 18 Park Street. The book describes the house as situated opposite St Martin’s Church, and although it still stood upon publication in 1907 it is no longer there.

The reason why he lived in Digbeth was probably to overlook his slitting-mill, which was powered by water from the river Rea. The mill was so named as it ‘slit’ plates of wrought iron into rods for making nails. The map below from 1731 shows access to the mill from Digbeth and Lower Mill Lane: 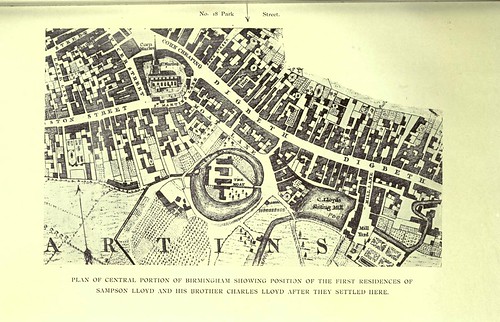 What is interesting is that most of the roads from 1731 remain, with the same names we call them now. The Mill Lane of 1731 still exists, with what is now Digbeth Coach Station sitting on the site of the slitting-mill.

If you look a little closer at the plans, you can also see the reasoning behind the naming of Moat Lane: it was adjacent to a large moated piece of land in the place where the wholesale markets now stand.

To see the book in full, click here to visit the Open Library, and if this has whetted your appetite to find out more, do let us know the results of your research by emailing contact@mydigbeth.co.uk.