Steven Knight, writer of Peaky Blinders, was in Birmingham last week promoting his most recent silver screen offering Locke. The film stars Tom Hardy, who has also been confirmed as joining the cast for the next series of Peaky Blinders.

We sent our roving reporters, John Gordon and Lisa Zdravkovic, to the premiere on Broad Street, who managed to walk down the red carpet at the same time as Steven and Tom! Following the screening, Steven invited Lisa and John to the after-party, where they had a good little chat.

Here’s the low-down courtesy of John: 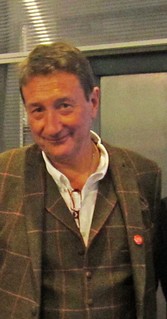 Steven Knight exceeded expectations, and came across as affable, open, engaging and a champion of the cultural industries in Digbeth and Birmingham as a whole.

Steven was genuinely aware of the Digbeth is Good website and Digbeth Residents Association’s Peaky Blinders tours. He described The Spotted Dog as a “great little pub” before we even had the chance to invite him to join us for a drink!

I presented him with one of our coveted Digbeth is Good badges in recognition of his contribution to local culture, which he fastened to his tweed jacket and wore with pride.

Finally, Steven exclusively revealed that the second series of Peaky Blinders will feature a character called The Digbeth Kid.

We’ve included a picture of Steven wearing his DiG badge, and we’re now even more excited for the second series of Peaky Blinders!

Thanks go to John and Lisa, and we’ll keep you updated with news of Steven’s trip to The Spotted Dog.

Make sure to keep an eye out for more information about The Digbeth Kid, and we’ll be sharing details of future Peaky Tours along with planned events to coincide with the new series of Peaky Blinders here first.